Here in temperate and rainy central North Carolina it doesn't snow much or at least for the two years we've been here.  The previous snow fall was 14 months ago but the 'snow drought' was broken this week!

After much hoopla and anticipation the steady rain that had been falling gradually turned to sleet and then actual snow late in the afternoon.  By that time the schools had closed and the offices and shops had emptied out as everyone streamed to Food Lion to pick up the obligatory NC disaster food: Milk, Bread, Eggs.  The 11 p.m. news showed empty food shelves as panicked pre-Apocalypse persons had already picked those three food groups as their items of choice to survive the coming snow-pocalypse.

We of course ventured out for our usual nightly walk and found blowing snow, slushy roads, and a biting 32F wind.  What was this, the Great White North? 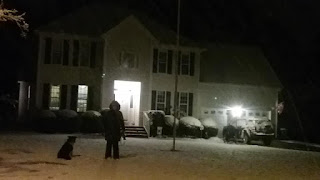 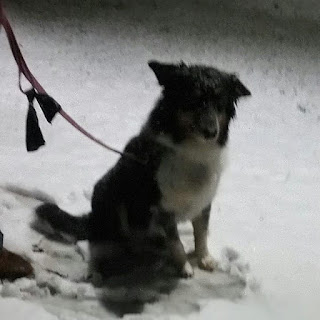 Even though the temperature was 28F when we got up, some of the snow had already started to melt off from last night.  The ground and pavement was still warm so the snow was fighting a losing battle to stick around.  Our morning walk was pretty though. 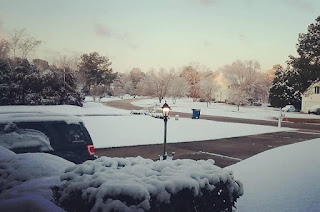 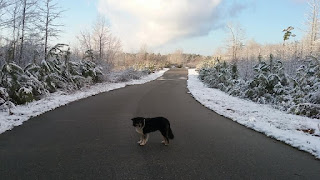 Kerby found that doing her business in the snow was not what she had signed up for when she agreed to come to NC with us but finally was brave enough to try it.  Such is the dog's life!

Posted by Older and Wiser at 6:36 AM No comments:

Our puppy is now six weeks old and no name yet.   In the running:

No one but me like Nessie.  We better pick a name soon because in 2 more weeks she will be here! 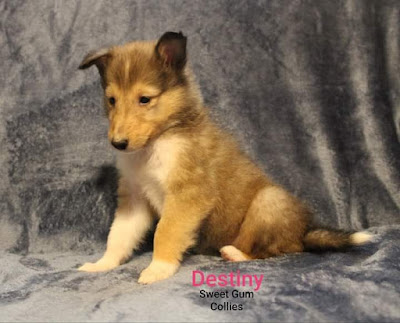 Posted by Older and Wiser at 7:26 AM No comments:

The Count Down Begins....

Today was my last day at work for some time but not my last day of work.  I'm going into semi-isolation for the next week and a half before my prostate cancer surgery to shield myself from colds and the flu.  My immune system is compromised so I'm trying to stay away from the folks at my job site that seem to be constantly coming down with some sort of respiratory sickness.

Starting Monday I'll work from home, so I bought my laptop, keyboard, mouse, mouse pad, chargers, paperwork, work cellphone and cellphone charger.  These are the modern equivalent of my sword and shield and with them I am prepared to do battle (remotely) on my employer's behalf.

The folks at work were nice and wished me best of luck and a swift return.  It was nice to hear their good wishes.  I hope I don't let them down by being nervous or wimpy when the time comes to get cut open.

Posted by Older and Wiser at 5:34 PM No comments:

Because our lives aren't about to be complicated enough with my impending surgery and recovery, we've decided to amp things up with a new puppy in the house!

The Missus has always wanted a rough Collie (since little girl times).  Our current dog was one of three, then one of two, and is now the only dog in the house (except when I'm in the dog house) and she  loves having a doggie friend around to run and play with, when a grand dog comes for a vist.

So, we started the search for a puppy and last fall got on as list for a pup at a kennel about 1.5 hrs from home.

Puppies were born in January and we picked out this one from the litter.  Her kennel name is Destiny but right now Penny is leading in the voting for a permanent name. 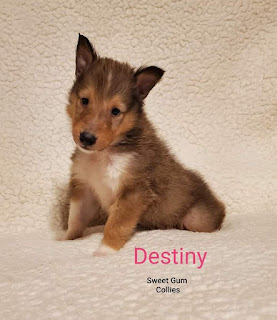 It's been 8 years since we've done the puppy thing.  Hope our skills aren't rusty!

She arrives on February 29 so stay tuned.
Posted by Older and Wiser at 6:36 AM No comments:

Even Older and probably No Wiser

Anyone still reading this?

I dropped by to see what's happening here.   Would you like an update?

Invited a rough collie puppy to join our family

Found out I have prostate cancer

Lots of other stuff happened too but these are the highlights.

Perhaps I'll be back to write some more.

Our lovely back yard is host to all sorts of cute wildlife.  We have a multitude of birds such as finches, California scrub jays, mourning doves, even some east coast robins have visited over the years!  Quail join us too as do rabbits and Disney cute brown ground squirrels.

Recently the Missus planted two Dahlias: a red one and a yellow one.  I had just done my shoulder operation so the Missus and Young Son dug the holes, moved the dirt and gently laid the flowers in place.

They bloomed and thrived and all was right in the world.  Until the Missus noticed that something was biting the buds right off of the Dahlias.  Not only that, the rose bushes were being stripped of their leaves as was the poinsettia!

We first blamed insects.  Of course the hapless insects always get blamed.  I can just see them now, at the insect bar having a brew with the snails and slugs saying 'you hear we're getting blamed for the Dahlia buds?  Again with the buds?  Why I wasn't even in the neighborhood that day...'

Then we noticed a new squirrel in our back yard.  It was thin and shifty looking.  Gray with a long skinny tail.  More menacing than cute.  Then another, and another!  Soon we realized a gang had moved into our back yard.  The gray squirrel gang.

Just seeing them cued music from "West Side Story".  They were either the Sharks or the Jets; I couldn't tell which.  They undoubtedly had a switchblade concealed in their fur somewhere.

I didn't want to do it but I had to do it:  the bird feeders were taken down but we left the finch feeder in place.  Apparently squirrels don't like thistle seed.

The poor birds wondered what happened to their free lunch and left for more lucrative yards.  One morning after several days sans feeders the Grays didn't show up.  Nada.  They had moved on.

About a week later the brown squirrel came back, cautiously, tentatively checking the territory.  He got a sniff of the pepper and shook his head and ran off but he came back the next day to poke around.

These days the Dahlias and rose bushes are thriving and the mourning doves and quail decided they like the thistle seed dropped by the finches.  The rabbits are back to grazing on the grass and the insects are no longer being slandered.   And the Grays?  They've moved on to terrorize someone else's flowers...for now.
Posted by Older and Wiser at 1:20 PM No comments:

Update to the update!

1. House is sold to a nice young couple with two little boys.  They are calling our house their "forever house".  My eyes misted up at this.

2. I visited NC and picked a house that the Missus can accept.  2400 sq ft on a 1.5 acre lot for less than half of what our current house is selling for.  I also got to visit with Oldest Daughter and family.  What a great time!

3. Youngest son found an apartment and moved most of his stuff out today.  Still some stuff left but in the next couple of weeks he will be living 52 miles from us.  I am proud of him but so very sad to see him go.  Our baby!

4. We are having dual home inspections today on both properties!  Hope neither inspection turns up any issues.

Such a sad time but also an exciting time.
Posted by Older and Wiser at 9:18 AM 1 comment: 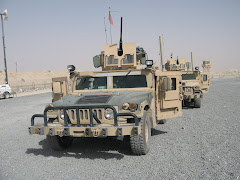 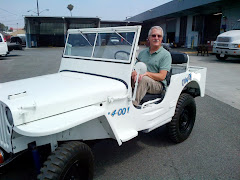 Older and Wiser
Your host is an early 60s untypical member of the American middle-class. I am a conservative Republican who takes public transportation and commutes by electric car. I don't like Rush Limbaugh. I treasure the environment and even belonged to the Sierra Club for awhile. I am a proud citizen-soldier, very happily married 38 years and a father of four wonderful children and the grandfather of one special little grand daughter. I hike, shoot, and off-road whenever I can. My reaction to the world makes me seem grouchy but I'm actually a nice guy. 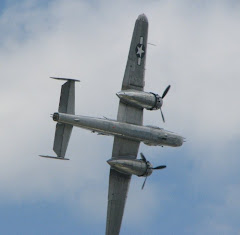